A stalwart of the All Progressives Congress (APC), Mr. Kassim Afegbua has slammed President Muhammadu Buhari for declaring for a second term. 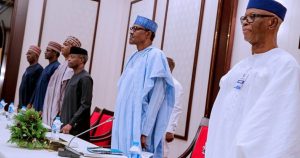 it is immoral for the President to run for a second time after promising to do just one term.

Pictures of old newspaper publications, with the President promising to serve for just one term have flooded the social following his declaration.

Afegbua, who was recently invited by the Department of State Security over a press statement, he issued on behalf of former Head of State, Gen Ibrahim Babangida (retd) calling on President Buhari to retire from politics, argued that the President can no longer be described as a man of integrity.

“I have said before now that politics has no morality and the idea of integrity is just on the lips of political gladiators but never from their hearts.

“PMB said in 2011 he would only need to serve one term. It was widely publicised. That’s a statement from a man who sees integrity as his second nature especially by his supporters. In 2018, serving his first term, he has declared his intention to seek re-election”, he wrote.

The former commissioner of Information and Orientation in Edo State also argued Buhari is too old to be contesting for a demanding job, like that of the president of Nigeria.

“He will be 77 next year. For a man of supposed integrity to eat his words barely 7 years after is a mark of crass inconsistency. It takes away a lot from his integrity claim.

“My position that there is no integrity in politics suffices, and that includes PMB. Truth is also a sacrilege in politics while morality is a sin. In a country of sins without sinners, we all are thesame.

“So no man should preach integrity and morality to me. Preach to me other selling tips”, Afegbua added.