The national leadership of the Peoples Democratic Party comprising the National Working Committee, PDP Governors, National lawmakers elected under the platform, members of the Board f Trustees on Wednesday asserted the dominance of the party in the politics of Bayelsa State.

The National Chairman of the party, Prince Uche Secondus, the running mate to the Party’s Presidential Candidate, Dr. Peter Obi, the Governor òf Bayelsa State, the Hourable Henry Seriake Dickson, other governors, their National Assembly counterparts were unanimous in their position that the APC was no option in the governance of Bayelsa.

The PDP leaders said only a tested, articulate and experienced public servant in the mould of Senator Douye Diri, the candidate of the PDP would continue with the exemplary developmental exploits of the Governor Seriake Dickson -led administration.

They called out Bayelsans to reject the opposition All Progressives Congress to prevent the enviable legacies of the PDP administration of Dickson from destruction by the APC and its candidate, Chief David Lyon who they said lacked the requisite capacity to govern Bayelsa.

A statement by the Chief Press Secretary to the Governor, Mr. Fidelis Soriwei, stated that the PDP leaders spoke while addressing the gubernatorial mega rally of the party in Yenagoa.

The National Chairman of the PDP, Prince Uche Secondus, said that it was rather unfortunate that the APC presented an unelectable candidate lacking in capacity to represent himself, Bayelsa and Ijaw people for the governorship of the state.

Secondus said that the APC and its leaders should tender an open apology to the People of Bayelsa and Nigerians for presenting such a candidate as David Lyon to Bayelsa for the position of governor.

He said that the leader of the APC in the state, and Minister of State for Petroleum Resources, Chief Timipre Sylva did not show love for his native Bayelsa when he left competent citizens with the requisite academic qualifications and experience to come up with the barely literate candidate of the APC.

Secondus said that the unprecedented crowd and massive number of APC members who defected to the PDP in their thousands was a clear message that Bayelsans have rejected the APC.

The PDP National Chairman took a swipe at the APC which he said had damaged the country and inflicted hardship on the people since it took over political control at the centre since 2015.

Secondus noted that the party which wrested control òf the Presidency from a son of Bayelsa has deliberately refused to embark on developmental projects in state and should be paid back with rejection.

“As soon as they took over in 2015, the entire system collapsed, the government collapsed, security collapsed, hunger came in, banking and everything collapsed in the country. Will you vote for them?

“The security agencies should not allow themselves to be used by APC to ruin this election. The country is suffering because of the damage done to our election. We don’t want a repetition of what happened in Rivers. All those in authority should allow peace to prevail.

“They should stop damaging the country, our people are in hunger, let’s start from Bayelsa, to practice free and fair election,one man one vote,” He added

In his speech, Governor of Bayelsa State, Honourable Seriake Dickson said the PDP is the only platform that has given Bayelsa and the Ijaw nation a voice and brought a lot of fortunes to the people.

The governor who noted that the restoration government had weathered what he described as political storms from 2015 to date, expressed confidence that the party would celebrate victory once again come November 16.

He therefore urged all eligible voters to turn out enmase and vote Diri/Lawrence ticket to ensure continuity of the good works started by his administration.

“The umbrella is the party that has shielded us from all storms. The PDP is the only party that has given us a face. Our party has overwhelming majority at all levels from the state to the National Assembly.

“Here is a message to those in uniform, in the services who will be told to rig the election. Know clearly that our people are ready to vote for peace, stability and investments in all its ramifications. While we call for professionalism, the world should know that Bayelsa is the heartland of the PDP.”

Also speaking, Governor of Bauchi State and chairman of the PDP National Campaign Council, Senator Bala Mohammed described Bayelsa as strategic to the economic wellbeing of the country.

Senator Mohamned who is also Chairman of the National Campaign Council, urged the people not to allow what he termed as forces of darkness to prevail in the coming election.

Speaking on behalf of other PDP governors, Governor of Sokoto State Alhaji Aminu Tambuwal said the party is aware of the APC’s plan to rig the election, stressing that the mammoth crowd is a clear testimony that Bayelsa is a PDP state.

Also in his speech, the PDP Governorship candidate, Senator Douye Diri, said he would prioritise the completion of the three senatorial roads, Agge Deep Seaport and Brass National Liquefied Natural Gas project when elected into office, through partnership with multi-national oil companies operating in the state.

Senator Diri ascribed his emergence as PDP candidate to the grace of God, the efforts of Governor Dickson and the good people of Bayelsa against all odds.

Other governors at the event were, Dr. Ifeanyi Okowa of Delta, Emeka Ihedioha, Imo; Seyi Makinde, Oyo while the Governor of Ebonyi State was represented by his deputy, Dr Kelechi Igwe. 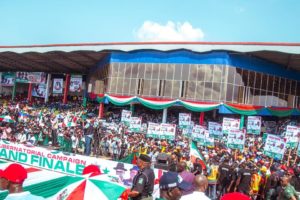 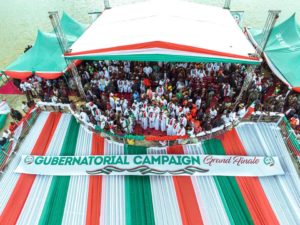 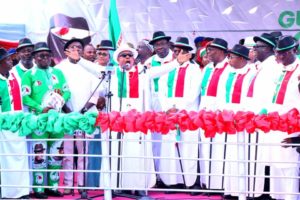