By Kemi Yesufu and Kehinde Akintola

House Majority Leader, Rep. Femi Gbajabiamila on Sunday formally joined the race for the office Speaker of the 9th House of Representatives.

Gbajabiamila’s declaration is significant, as like his Senate counterpart, Sen. Ahmed Lawan, the Lagos lawmaker is the preferred candidate of the ruling All Progressives Congress (APC).

However, investigation conducted by, Frontline News Online, indicates that some ranking members of the APC not disposed to the House Leader emerging Speaker are working on producing a strong candidate, with the support of members elected under the main opposition, the People’s Democratic Party (PDP). 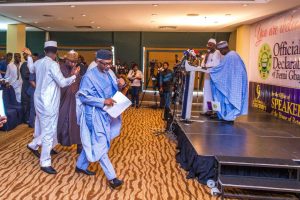 The lawmaker’s official announcement of his interest to lead the House comes after earlier declarations by other members such as the spokesman of the Green Chamber, Rep. Abdulrazak Namdas, Oyo lawmaker Rep. Odebunmi Olusegun,  APC newcomer, Rep. Nkiru Onyejeocha and Rep. Yakub Buba from Adamawa State.

Delivering his speech in the crowded declaration ceremony beamed live on TV, Gbajabimila pledged that he would be the people’s Speaker.

According the Gbajabiamila, he is better qualified than other ranking members in race owing to his unique experience as former Minority Leader and now Majority Leader in the Green Chamber.

He said: “With all sense of humility, I seek this office with a rich legislative background and pedigree and having just won a historic 5th term mandate to the House. I have in the last 16 years dedicated my life to the service of my constituents and Nigeria. I have studied and understood the intricate workings of the legislature, a critical arm of government and I have come to understand the imperative of striking a delicate balance in the relationship between the Executive and Legislative arms of government without compromising the latter’s independence. Indeed there is an essential need for a symbiotic relationship between all arms and all tiers of government if we are to make progress in nation building.

“In these 16 years I have been a principal officer for 12 years. I have occupied the office of leader of the opposition and successfully my party from opposition to majority in the House and thereafter assumed the position of house leader, placing me in a uniquely advantageous position of understanding the nuances and intricacies of this very critical arm of government and the need to for its independence and at the same time interdependence with the executive. It is this wealth of experience and a burning desire for good governance that I bring to the table. A desire to take the legislature to the next level standing tall and shoulder to shoulder with the most advanced legislatures world over.I have spent the last 4 years in doing my best to stabilize the House, whilst exploring and studying now how best we as legislators can unleash the full potentials of this country. I have taken copious mental and physical notes and its time for implementation.

“I have tagged my campaign NATION BUILDING, A JOINT TASK because the task is onerous and can only be completed if we all come together, in line with the legacies of our forebearers and the labour of our heroes past. Our Speakership campaign logo embodies logos of all political parties represented in the House (9thAssembly) and I humbly invite each one of them to join me so together we can build a more perfect union. I seek the buy-in of all my colleagues, political parties and Nigerians to this Joint Task”.

Gbajabiamila’s push for the office of Speaker received support from members who attended his declaration. First  to hail Gbajabiamila’s candidature was the Director-General of his campaign, Rep. Abdulmumin Jibrin, who described the Lagos member as highly qualified. Same for other speakers at the event such as House Chief Whip, Rep. Alhassan Doguwa,  Rep. Khadija Bukar Abba-Ibrahim and Rep. Wole Oke of the People’s Democratic Party (PDP).