Her death which followed years of sexual abuse led to protests across the country and today, the Late  Ochanya Elizabeth Ogbanje was remembered by her elder brother Ameh Ejekwonyilo.

Ochanya who was allegedly molested for years in aunt’s home by her husband Andrew Ogbuja and his Son, Victor died last year. 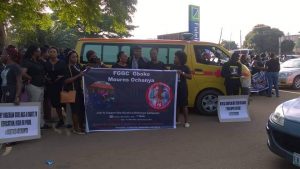 Victor a student of the University of Agriculture Makurdi is still at large while his father, Andrew is currently facing charges in court.

Ochanya’s death was condemned by many, with thousands marching in protest and demanding #Justice4Ocjanya within and outside the country.

Her brother remembered the late teenager with a post on his Facebook page, disclosing that she would have turned 14 this Sunday.

Forever In Our Hearts
I waited yesterday in vain for her usual phone call; reminding me of her birthday present. It never came!
Our angel, Ochanya, would have turned 14 today; but for the awful abuse she endured at the hands of the dubious Ogbujas for several years.
Her tall dreams were brought to an abrupt end. Even in the face of death, Ochanya had stoically assured distraught Mama that nothing untoward was going to happen to her.
Ochanya’s stellar performance in school left no one in doubt of her determination to pursue her dreams.
Today, we remember with immense grief your short but eventful life. We can only turn our heartbreak into a call to confront the epidemic of child sexual molestation in Nigeria.

As you lie in the grave, anxiously waiting for justice to be served on your aggressors, we will not rest until that is achieved…

We miss you sorely, and you will always remain in our hearts!