The family of Late Ochanya Ogbanje, who died after years of sexual abuse have raised an alarm over threats to their lives and cases of intimidation by relatives of Mr. Andrew Ogbuja, who is being tried for raping the former student of Federal Government Girls College (FGGC) Gboko. 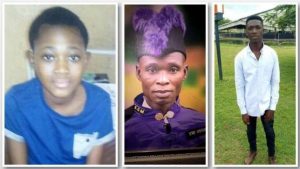 Speaking at a joint media briefing with the FGGC Gboko Old Girls Association and Make a Difference Initiative (MAD) on Wednesday in Abuja, spokesman for the late teenager’s family, Mr. Ameh Ejekwonyilo, said he was threatened by an in-law of Mr. Ogbuja’s. This is even as relatives of his, who are willing to testify, have been threatened in order not to appear in court.

Ejekwonyilo described as highly worrisome, the continued linkage of Senator Abba Moro to the Ogbujas, with allegations that powerful individuals are committed to frustrating trial of Mr. Ogbuja.

He said: “I had in the past told the world about attempts to harass and intimidate my family as well as witnesses, by the family members of the Ogbujas and their in-laws, who claim to have very close ties with Senator Abba Moro, who is believed to be very powerful in view of the fact that he was a former Minister and senator.

“While we had reluctantly believed Senator Moro’s denial at the inception of the case that he was not supportive of Ochanya’s alleged rapists or behind clandestine moves to kill the case through pleas from one of his aides, Mr Austine Ochiga, who is the immediate elder brother to Mrs Felicia Ogbuja (the suspects’ wife and mother, who is also a suspect in the sister case being handled by NAPTIP); recent revelations have however indicated to the contrary.

“Senator Moro’s denial was widely reported in the print, broadcast and social media last year when he stated in Ochanya’s village where he went to condole with her father, that his name was either being dropped or merely being maligned by his traducers. He reportedly warned all his aides to keep clear of the case”.

“However, the recent harassment of one of the family members of the late Ochanya who is a key witness in the matter by political associates of the Ogbuja and Ochiga families is disturbing to say the least.

“By the calculation of the suspect’s family political associates, if witnesses fail to attend court proceedings, the suit would be struck out by the trial judge for want of diligent prosecution.

“I wish to use this opportunity to call on Senator Moro to openly come out to once again clear his linkage with truncation of the case as his alleged interest and involvement is no longer a question of namedropping and sheer malice of his political opponents as he had previously alleged” he added.

Ejekwonyilo called on the Inspector General of the Police, Mr. Mohammed Adamu to look into reasons why the second accused in Ochanya’s case, Mr. Victor Ogbuja has not been arrested. He urged that the police declare the younger Ogbuja wanted.

Also speaking at the briefing, President of the FGGC Gboko Old Girls Association, FCT Chapter, Dr. Ngozi Azodo, called on Governor Samuel Ortom to keep to his promise to ensure that Ochanya’s family receives justice. She also reminded the governor of his pledge to immortalize the late teenager.

Azodo joined in asking that the Benue State commissioner of Police to act on the petition sent to his office by Ameh Ejekwonyilo, alleging that he had been threatened.

“We are hopeful based on the promises made by Governor Samuel Otorm to ensure that those arrested over Ochanya’s death are made to face the law. We however seek that the Governor moves beyond promises by issuing a fiat through the Attorney General   of the Federation of the state to appoint a private legal firm to prosecute Ochanya’s case”.

“We call on the Inspector General of Police, Mr. Mohamed Adamu to look into reasons why the second accused in Ochanya’s case, Victor Ogbuja is still at large. We strongly believe that if the Nigerian Police prioritizes our late school girl’s case and applies its resources more effectively, Victor will soon be apprehended and made to account for his wicked act.

“We also join the Ochanya’s family in calling for the commissioner of Police, Benue State, to investigate allegations of threats and intimidation leveled against a member of the family of the accused by Ochanya’s elder brother, Ameh, as contained in a petition sent to his office. Theirs is a humble family simply seeking for justice and they shouldn’t be threatened in anyway or form. The family’s safety should be top priority to the police”, Azodo further said.

On his part, the founder of MAD, Mr. Lemmy Ughegbe, reiterated the need for a fiat from the governor for a private legal firm to take over the prosecution of Mr. Andrew Ogbuja.

Ughegbe further called on Governor Ortom to confront the rising cases of child sexual abuse in his state in memory of the Late Ochanya.