On Sunday 13 October, KIEK Foundation marked its first year anniversary. Founder of the foundation, Mrs. Ebele Iyiegbu and those who have supported her, had reasons to celebrate.

Ebele, a mother of four, with the support of her husband, millionaire businessman Obinna Iyiegbu and other kindhearted friends has touched many lives in the last one year. The KIEK Foundation has seen to 115 kids returning back to school, with their hopes for a better future restored.

Speaking to Frontline News Online, the woman behind KIEK Foundation said she has been able to give life to the three thematic areas of her Non-Governmental Organisation (NGO). She said: “Our three pillars are education, health and nutrition, as well as protecting the rights of children”.

“For education, we have a programme called ‘Street to Class”. We take children from the streets, children involved in child labour and hawkers back to school. When we see these children, we take them home to speak with their parents. We ask them, if they wish to have their children back in school and if the challenge, they have is paying for their school fees. If yes, we get them (kids) registered in a school near home and we pay for them. We don’t stop at that; we monitor them through their teachers”, she added, making light of a tough task. 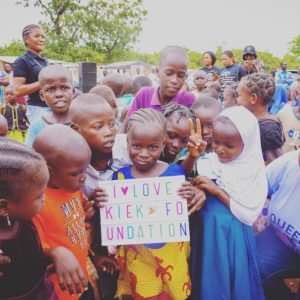 Taking her interventions to Anambra, Imo, Lagos and Enugu, after doing some work in her Abuja base, Mrs. Iyiegbu has brought succor to different individuals. “For health, we conduct hospital visitations during which we pay for those stranded.  For example, we helped patients in Nnewi and the National Hospital Abuja, who were held up and we paid for their bills.  For nutrition, we visited the Internally Displaced Persons (IDPs) camps. We’ve also been to orphanages to help the children with their feeding”, she disclosed.

On the issue of advocating for the protection of children’s rights, the KIEK Foundation started from within by ensuring that its staff, supporters and collaborators practice what they preach. They  were made to sign-up to defend the rights of children around them. “We participated in a walk with ‘Abuja Moms’ against child molestation. We did another one for child abuse. We want to get everybody that is working with KEIK Foundation, to sign-up to uphold the rights of children. We want people connected with us to always protect children around them”, Ebele said.

The love and genuine concern for children’s welfare is written all over the KIEK Foundation chief promoter and it seems she has no plans of slowing down, as the effects of what she has experienced in the past year has made her more committed. “The major experience I’ve had since we began is that children are vulnerable. I don’t think their stories are told”, Mrs. Iyiegbu revealed. “You need to go to the streets and the hospitals to see what is going on. Then, the state of IDPs in camps is deplorable. They sleep on the floor, the women give birth in the camps and when they manage to go the hospital, they have to pay and there is nothing for the baby. The babies born in camp are kept on the floor. We had to buy cots and mattresses to assist families. There are no toilets or bathrooms in IDP camps”.

“I want to make that difference. Like, said in our mission statement, we want to see a world where a child has access to quality education and health care. We want to see a changed world. For girls, we did the ‘Pad Up Africa’ as part of promoting menstrual hygiene. We have carried out advocacy on promoting the use of sanitary pads and we have called on government to make sanitary pads affordable. If we can give condoms out for free, government should also give sanitary towels out for free”, she went further to say. 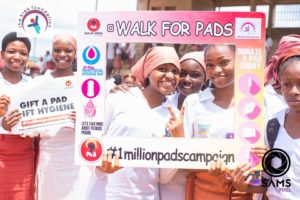 Again, Ebele’s palpable compassion for the less privileged leads to the question on how she came about the urge to assist to which she replied:  “All my life, I looked forward to doing humanitarian work. After graduating as a lawyer, I was moving from one NGO to another looking for work. I wanted to help people”.

Delving deeper into her thinking, the KIEK Foundation point woman said starting with kids, for charity work came naturally.  “My starting with children comes from my passion for them. I’ve seen children struggle to go to school and as someone who believes strongly in basic education, I want to see more children get the basic knowledge they need and they now move to higher institutions or learn skills which they can use to live decent lives”.

Ebele Iyiegbu is a silver spoon kid, whose mother’s kindness to struggling families molded her into a humanitarian.  “In growing up with a silver spoon, I wasn’t spoilt. So, I had less privileged people around me. My parents allowed people come around us, I could see their struggles. My house was somewhere that children could come around to eat, play and their mothers would visit, sometimes speaking to my mother about their problems”.

Opening up on her hopeful future for KIEK Foundation, she said: “We are thinking of getting ten thousand children back to school. In three years, we want to see the foundation having branches in other parts of the country and before six years to have branches in Africa.  We were thinking of getting one thousand students into school in the first two years.  But because we have the challenge of funding, we are still at115 children. If, we are able to get more funding we will bring our dreams to reality. For now, I rely on my husband and friends”.