A Twitter user, Mr. Joey Saladino, says he has donated one of his own testicles in protest against the impeachment of America’s 45th president, Mr. Donald Trump.

Saladino’s latest claim is an alleged fulfillment of a promise he made in a September 24, 2019 tweet:

If Trump gets impeached, I will donate my Left testicle to medical research.
You can quote me on this.

However, President Trump was impeached by the American House of Representatives on Wednesday, December 18, 2019, at 8.34 pm ET.

The first charge bordered on abuse of power. The president was accused of trying to pressure Ukraine to smear his political rival, Democratic presidential contender, Joe Biden.

The second charge says the president had obstructed Congress, by failing to co-operate with the House’s impeachment investigation.

Mr. Trump has denied any wrongdoing, saying, he had been treated worse than “those accused in the Salem witch trials.”

Mr. Saladino appears to be a Trump sympathiser and GOP supporter, considering his unrelenting tweets in support of the Republican Party and the President, while taking umbrage at the Democrats.

Red is usually used to describe the American states controlled by the Republican party, as well as the GOP’s official colour.

Following President’s Trump’s impeachment on Wednesday, Saladino informed his 148,900 Twitter followers that he had made good his threat.

If Trump gets impeached, I will donate my Left testicle to medical research.
You can quote me on this.

For the Haters who say it is fake

Saladino claimed to have not only donated his own testicle, he also said he got a letter of acknowledgement from the National Testicle Association, NTA.

A Google search, however, did not return any information on the association.

Worse still, the badly worded letter signed by no less a person than “Dick N’ Bawls,” refers to the association as ‘Nation Testicle Association.’ Suffice to say, ‘dick’ is a nuanced reference for male sex organ.

See the alleged letter of acknowledgement: 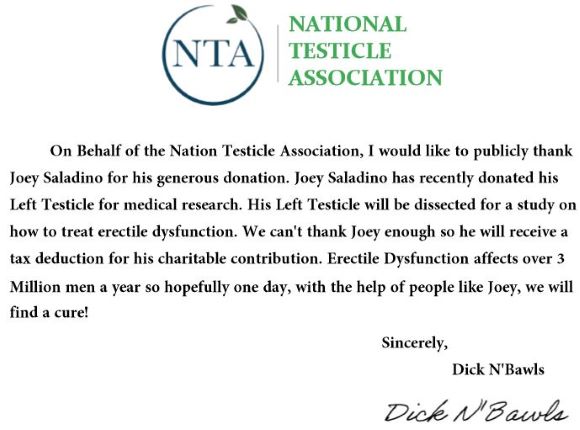 Many of his Twitter followers expressed doubts about his claim, while others urged him to undergo vasectomy as well.