I was jailed for fighting corruption — President

Speaker of the House of Representatives, Yakubu Dogara on Tuesday said that there were millions of Nigerians spread across the globe who are corrupt-free apart from President Muhammadu Buhari.

The speaker stated this at the commissioning of the new corporate headquarters of the Economic and Financial Crimes Commission , EFCC, in Abuja.

Speaking at the commissioning ceremony attended by former President of South Africa, Tabo Mbeki; Secretary General of the Commonwealth, Baroness Patricia Scotland, and heads of anti-corruption agencies of member countries, Dogara acknowledged that President Buhari has won global acclaim for his hard stance against corruption. 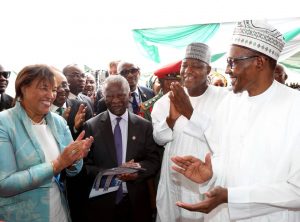 He said:  “The fact that we have seated here, before us a President whose global acclaim has been corrupt free, I can tell you that he is not alone in Nigeria. There are millions of Nigerians that we come across day by day that are corrupt-free.”

Making allusions from the Holy scriptures, the speaker said:  “There is a representation of history, a prophet cried to God and said there was only one man that has not bowed his knees to Baal, but God replied to that prophet, saying that he has reserved several others in that city who have not bowed their knees to Baal. “There are millions of Nigerians that have not bowed their knees to the god of corruption and that fact must be emphasized.”

Dogara said the building of the new EFCC headquarters was a demonstration of the Federal Government commitment to the fight against corruption and explained that it was necessary for the government to now begin to place emphasis on staff and officials of the commission whose trust and sacrifice are critical to the entire anti-corruption war.

“Mr. President, we have the responsibility to insulate the officers and men of this agency from temptation and that means we have to better their condition of service,” he added.

……I was detained 3 years for fighting corruption — Buhari

In his remarks, President Buhari told the gathering that he will not be deterred from continuing with his anti-corruption war, despite prevailing hitches, adding that he was imprisoned for three years the last time he made an attempt to fight corruption in the country.

The President, who said his government has recovered trillions of Naira that were stolen in the past few years, added that his government was still pursuing recoveries everywhere to make sure that everyone who had been found culpable was made to answer for his or her crime under the law.

While seeking collaboration of the judiciary, which is a critical stakeholder and partner in the war against graft, President Buhari also called on the Legislature which provides the framework for the anti-corruption war to add more verve to the determination of his government to rid the menace witnessed in recent years. This, he said, could be done through the review of archaic provisions in the country’s laws and proactive passage of new legislation.

He said:  “We must change our ways of handling public trust. Corruption not only kills governments but destroys societies. It is the major reason why we are struggling with basic developmental issues that other comparable nations have long overcome. “War of corruption is not an easy one to fight, because it affects so many different branches of our lives, so much that some people do not even consider breaking trust anymore as a crime. It has become the norm. That is why we must fight this attitude and encourage Nigerians to change their attitudes and perspectives. “The goal of this Administration is to ensure the protection of public trust, and the anti-corruption war is at its centre. We never intended, and we are not engaged in witch-hunts, but we are determined within the laws to call people to account.”

President Buhari further appealed to Nigerians to support regulatory agencies such as the Economic and Financial Crimes Commission, EFCC, adding that fighting corruption was everyone’s business. Chairman of the EFCC Ibrahim Magu told guests at the event that the new building was conceived in 2005 with the contract awarded to Construction giant, Julius Berger in 2010. According to him, the headquarters will accommodate 700 staff members of the organisation and has a laboratory and health facility.

Magu said that since President Buhari took over office in 2015, the EFCC has convicted about 422 cases with 89 of them secured in 2018 alone. The commission he said has recovered about N500billion looted funds. The construction of the new building which is fully funded by the Federal Government cost about N24billion.