The Special Adviser, Media, to the Governor of Sokoto State, Imam Imam, is dead.

According to a tweet by the Sokoto State Government, Imam died on Friday at the Nziamye Turkish hospital, Abuja, after a brief illness.

Innallillahi wainah illahi rajuun. We regret to announce the death of Mallam Imam Imam who until his death was the Special Adviser Media to H.E @AWTambuwal. He died in the early hours of Friday at Nziamye Turkish Hospital in Abuja, after a brief illness. pic.twitter.com/MElq6KuiIN

Meanwhile, former President of the Senate, Senator David Mark has sent a message of condolence to Tambuwal over Imam’s death.
Senator Mark who lamented over the death of Imam, described him as a vibrant journalist, public affairs administrator and a promising leader in Nigeria.
He said, “I am shocked by the demise of Imam; a prolific writer, a frontline image maker and an emerging political leader. His death is akin to one, more than a hundred fell in a pogrom.
“He was a complete gentleman and a result-oriented public officer. His uncommon dedication to duty and loyalty was unequalled”. 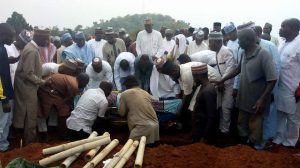 Mourners lower Imam’s body into the grave at Gudu cemetry, Abuja
Senator Mark recalled that late Imam earned the trust and confidence of his principal (Tambuwal as the then Speaker of the House of Representatives) who reappointed him as his Special Adviser when he became Governor of Sokoto State in 2015.
Only last week, Imam posted on his Facebook wall his intention to contest the 2019 House of Representatives seat in his home State, Taraba.
Senator Mark told Tambuwal and the immediate family of Imam to take solace in the fact that he lived a brief but eventful life worthy of emulation.
Imam was the political Editor of Thisday Newspapers Limited in Lagos, before he was appointed Media Adviser to the then Speaker of the House of Representatives, Aminu Tambuwal in 2011.
Mark prayed that may “Almighty Allah give the immediate family of Imam, governments and people of Sokoto and Taraba States the fortitude to bear this painful loss”.
Post Views: 627