Speaker of the House of Representatives, Rep. Femi Gbajabiamila has demanded for an independent investigation by the South African government into the recent xenophobic attacks, of which many Nigerians suffered violence and destruction of their property.

Gbajabiamila while condemning the stereotyping of Nigerians as criminals in South-Africa also announced the decision of the House to sponsor Nigerians who decide to sue the South-African government.

The Speaker made the position of the House known at a media briefing held at the National Assembly on Friday.

Gbajabiamila, who cut short his trip to Tanzania for the Commonwealth Parliamentary Association meeting due to the outrage and condemnation that followed the latest round of violent attacks against Nigerians, equally reiterated the call for full compensation for those whose places of business were destroyed.

“There have been reports that state actors may have participated in the worst acts of violence; sometimes actively, at other times by standing and doing nothing whilst murder and mayhem was unleashed. We expect that the Government of the Republic of South Africa will conduct a thorough investigation into these allegations and make public their findings whatever they may be. Where any of these claims are determined to be true, we expect also that the individuals responsible will be held accountable to the highest degree allowed by law. 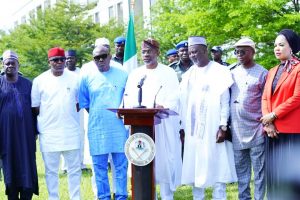 “The House of Representatives is united and determined in its resolve to meet our people at the point of their grievance and to channel grievance into constructive action. Let no one be left in any doubt, we will seek, and we will obtain by whatever means available, due restoration and recompense for all that has been lost in this latest conflagration and all the ones that have come before.

“We are committed to a sustained and special effort to see that the ends of justice are met for all our people who have suffered. We have heard the cries of our citizens, and we have witnessed their devastation. We will mourn for the dead, and cry for the lost, but we will not stop there”, he said.

He disclosed that the House will shortly invite the minister of Foreign Affairs, Mr. Geoffrey Onyeama,  the Nigerian Ambassador to the Republic of South Africa, the chairperson of the Nigerian Diaspora Commission, Mrs. Abike Dabiri-Erewa and other stakeholders to jointly consider the causes of these latest incidents of organised mass violence against Nigerians.

However, the Speaker who had on Tuesday announced the possibility of the House reconvening over the latest round of attacks stated his support for the actions taken by the Federal Government so far.

He also called for calm from Nigerians, saying looting and destroying business locations of South Africans does not form the right kind of response to recent happenings in South-Africa.

He said: “To every citizen of Nigeria in every city and every state who has watched recent events with rising anger and pain, we in the House of Representatives, are with you. To those who are sorely tempted to respond to these latest incidents with violence on our streets and destruction in our communities, I call on you to resist all such temptation. Your anger is justified, your pain is rightly felt but we cannot honour the memory of our fallen citizens by setting our streets aflame and our houses asunder.

“We will achieve nothing by destroying businesses that employ our people and provide a living for our families. We will honour the lives of our fallen brothers by making sure that never again will our citizens’ inalienable right to life and liberty be so wantonly denied here at home or anywhere else in the world. We will honour the sacrifice of the fallen by devoting ourselves once more to a covenant of service to one another, certain in the knowledge that our greatest protection against such harms, is peace, progress and prosperity in the homeland”.