It was a rare show of magnanimity, progressive leadership and ingenuity, as the Port Harcourt branch of Umuokoro Development Union (UDU), in Eziama, Ngor Okpala Local Government Area of Imo State, hosted the 2nd edition of the Umuokoro Academic Excellence Awards, where little favour Nwachukwu emerged the overall best pupil and went home with the star prize (brand new BMX bycicle), scholarship and other prizes. 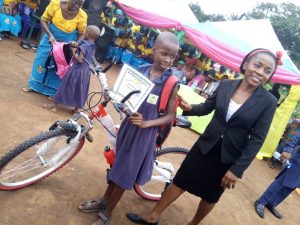 The program, according to the group’s president, Sir Chidi Oguibe, is aimed at promoting excellence among the primary school children in their community, with a view to imbibing the spirit of hard work as the only short cut to success in every field of human endeavor, especially, with the aim of stemming the tide of decaying moral values in the system. He said their vision is to ensure that, irrespective of the nonchalant disposition of the relevant government agencies to the plight of public schools, they want to ensure that they upgrade the community school to the best standards possible, with all the relevant learning facilities that some of the best private schools can boast of.

In his words, “You will recall that the Port Harcourt branch of the UDU began this annual ritual last year, with the aim of intervening in infrastructural, academic and moral decadence in our immediate society, and most especially in our own primary school; a school that has produced eminent scholars and professionals from all walks of life. Within the threefold agenda of establishing this award, we have made significant progress in all areas. In terms of infrastructural development within the school, we painted the Nursery section with relevant cartoon colours and other pictorials that will aid learning as well as donated the following items to the school; Generating set, 24 inches television set, DVD player, and numerous educational tapes that will enhance teaching and learning at the Nursery section. The television is shown 3 times a week and we are solely responsible for providing fuel and other logistics.

During the event, the school kids, who appeared indigent in every ramification, except for moral and academic standings, filed out to, intermittently make several heartwarming presentations, that did not in any way betray the fact that they are public school kids, talk more of being from a school in a local community.

They could stand heads and shoulders with their peers in the revered city based private schools, thanks to the generousity of Sir Oguibe and his supportive members from the Port Harcourt branch of the community’s union (UDU).

The high point of the event was the announcement of winners and presentation of prizes to all the various classes, from Primary 1 to 6, and Favour Nwachukwu led the whole school as the best pupil from primary 6 and the best graduating pupil, while Ogidi Emmanuel and Azuruole Favour trailed behind from the same class. Winners of the day from other classes are; Primary 5, Paul Chiamaka 1st, Iwejuo Faith 2nd and Onuegbu Ogechi 3rd, Primary 4, Njoku Ugonna 1st, Ikechukwu Chigozie 2nd and Ekeohuru Chukwuemeka 3rd, Primary 3, Ikechukwu Ijeoma 1st, Simeon Uche 2nd and Chimaobi Wisdom 3rd,  Primary 2, Onuegbu Regina 1st, Nwachukwu Ogechi 2nd, Okoroafor Favour 3rd, Primary 1, Nwaiwu Ukamaka 1st, Onukwufor Winner 2nd and Chidorom Ebube. These little angels shined like a million stars, as they were being celebrated for academic excellence.

Most instructive from this wonderful act of community development, is the fact that none of the members of the Port Harcourt branch of this union has their kids in this school, but because they saw the need to give back to society, especially, being that the same school had groomed a lot of them and other great minds, during the days that public schools used to receive some measure of attention from government.

Also speaking at the event, Sir Geoffry Ndubuisi Elike, Vice Chairman of the union and chairman of the organizing committee of the event, said the success of the 1st edition was a very good tonic for the planning of the 2nd edition, as they reached out to so many sons and daughters of Umuokoro from far and wide and their supports were amazing.

Speaking further, Mr Elike threw more light to the concept of Adopt a Child Campaign as promoted at the event, in his words “ The ‘adopt’ a child campaign is aimed at ensuring that some of these hard working kids do not have their educational careers truncated due to the inability of their parents to carry the financial burden of seeing them through school, hence we encourage well-meaning members of Umuokoro to adopt any of these kids whose academic capacities had been identified and is in need of support. The idea is for them to take up such responsibilities, as they can cater, thereby encouraging these kids to embrace hard work, knowing that their academic future will not be threatened, and I can assure you that so many of our people have started ‘adopting’ these kids.

We are not just stopping at infrastructural provision and these awards, we are also instituting a scholarship fund through which those kids that show promise, but whose parents are not capable, could be absolved. We are also monitoring their progress through school to ensure the purpose of this project is not defeated.

In a vote of thanks, the Acting Headmistress of the school, Lady Marbel Iheanacho thanked the chairman and members of the Port Harcourt branch of UDU for their efforts at improving the learning standards in her school and improving the self-esteem of the pupils through the annual awards. She however appealed to the state’s Education Secretary to provide them with more teachers, especially male teachers to help check indiscipline among pupils