Power Forward, a youth development initiative of Africare, Exxonmobil and National Basketball Association, in conjunction with the Federal Capital Territory Secondary Education Board, has attracted more beneficiaries in schools in Nigeria’s capital, Abuja.

From 10 schools where the initiative kicked off five years back, 30 secondary schools now benefit from it, Country Director, Africare, Dr. Orode Doherty, said at its finals at National Stadium on Friday September 28, 2018. 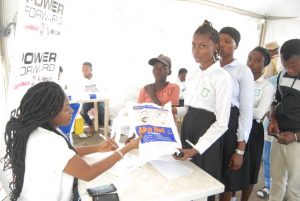 Addressing thousands of students and other participants at the finals, Doherty boasted that students of benefitting schools excel more than others in the country in terms of discipline, health literacy, life skills such as leadership, respect and personal responsibilities, which are the core values of the Power Forward.

The initiative uses basketball and other programming to achieve its objectives.

Doherty said the organization “is committed” to solving challenges facing Africa, one of which she said is training and empowering the continent’s youth.

She said this year alone, nearly a thousand students directly benefitted from its programmes in 30 schools in the FCT.

“We’ve conducted more than 140 student-led community development initiatives in the communitites around FCT and Project schools communities. We focus on malaria. Malaria was our stepping stone (into other ailments in the country),” she said.

She furthered that the initiative has included HIV, communicable and non-communicable diseases in its agenda. We are ensuring that the children are getting health education that they should get. This ensures that as stakeholders, they also adopt good healthy living habit, exercise, and promoting nutritious food, have understanding of the SDGs. These are what we really focus on; health and non-health related.

She said apart from health knowledge acquired by benefitting students, discipline, which she said remains a key objective of the Power Forward, help participating students get elected into leadership roles in their schools. There has also been corresponding increase in their academic performances, she noted.

According to her, the students are representing the FCT and Nigeria at local and international competitions.

Similarly, Government and Business Relations Manager, ExxonMobil, Nigel Cookey-Gam, said ExxonMobil continued to be a corporate leader in the fight to reduce the global burden of malaria.

According to him, malaria kills more people than HIV, and ExxonMobil is committed to developing sustainable long term community assistance initiative in Nigeria such as Power Forward.

He explained that Power Forward project also supports Nigerian Federal Government Malaria Control Programme advocacy on youth development and public health, adding that it builds on the efforts that ExxonMobil and malaria initiative provide to combat malaria in the country.

“The community investment programmes that we support focus on capacity building, training, education and health, especially among youth and women. Our philosophy is that a productive, healthy and educated society is a better place to do business. We hope that the skills that are built in the youth through this Power Forward initiative will bring about sustainable improvements in their lives. And, they will use these skills to develop their communities and Nigeria.

“Overall, through its programming and community outreach, the Power Forward programme has directly trained over a 1000 students in 30 schools in Abuja till date, with a multiplier effect of 12,000 in other schools and vulnerable communities.

The Federal Capital Territory Administration, through the FCT Secondary Education Board lauded the programme. Speaking at the event, Ag Chairman, FCT Secondary Education Board, Sunny Monidase, said: “We have now become a model. The programme started like just teaching the children to obtain basketball skills. But, it has gone beyond just learning how to play basketball. It has impacted greatly on our students. And, even I think some of the teachers also have been taught to change the way they relate with the students, to be committed, to care for the students more personally than just seeing the students as a number in the classrooms.

“Over the years that we have partnered with Africare, we have benefitted immensely from the Power Forward activities. And, the students have learnt so much in the area of health, particularly, malaria. If you hear them talk about it, you think they are in medical school, or they have graduated from medical school…So, we want this programme to continue, as well as, perhaps, increase their participation in our schools.”

Director of Malaria Programme, Africare, Dr Patrick Adah, said the initiative had been moving on tremendously, very successful. We started five years ago. And, the attendance at our programmes has been tremendous. It keeps improving every year.

“The Power Forward programme is a platform for educating the students on public health, especially malaria and other health issues. They are already malaria ambassadors in their schools. And, after the event, there is what we call the malaria jeopardy. The school that wins the malaria jeopardy is given money to do malaria activities in communities. There is a community activity that the school will be involved in carrying out the Malaria initiative. The schools have already imbibed that malaria control spirit because we all have to work together to ensure we defeat malaria”.

He added that the efforts have results in national reduction of malaria in the country.

Participants were screened for malaria and also given ACTs and insecticidal mosquito bed nets at the event.