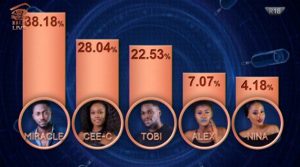 How the fans voted

Tobi  was the last housemate to be evicted from the Big Brother House. He wished Miracle good luck and walked out of the house, leaving him with Cee-C as the last two finalists.

Miracle probably didn’t need Tobi’s good wishes as he minutes later, he was crowned the winner of BBNaija season 2.

He goes home with N25 million, an SUV valued at N12 million, an all-expense paid trip with one partner worth N4.7 million and a brand new home entertainment system that costs N3.3 million.

Miracle an aspiring pilot was declared winner of the show at exactly 9.08 pm Nigerian time. The housemate who met and fell in love with Nina on the show, had campaigned for votes, saying he needs money to complete his training to fully qualify as a pilot.

As soon as he was announced winner, other housemates joined him on stage and he could be seen wiping  tears of joy off his face, when he managed to get back on his feet, after being knocked down in celebration by other finalists.

Miracle who had long stood out as one of the favorites on the show, only was asked why he started out keeping to himself. He explained that he takes time to observe before making friends.

For Cee-C whose fans have remained undeterred, voting massively to get her to second place,she wasn’t let off the hook by Ebuka. The famous show host relayed a question from fans to her  on why she hardly takes the blame when there were misunderstandings in the Big Brother House. And the housemates replied that it is normal for her to blame others and not herself. Surprisingly Ebuka failed to ask her what lies in the future for her and Tobi.

Other key moments from the BBNaija grand finale.

Cry baby of the BBNaija house, Alex is the second finalists to be evicted from the House. This leaves controversial Housemate Cee-C as the last girl standing. The final eviction started with five finalists, three girls and two guys, namely: Tobi, Miracle, Alex, Nina and Cee-C. As it stands, only three finalists are left to contest for the N45m grand prize.

Earlier gists from the live eviction

The BBNaija grand finale live show started with a hyped- up performance from Davido. The artist who earlier visited the finalists in the House started off by performing his hit single, ‘fia”.

Before then, first runner up from BBNaija 2017, Bisola welcomed fans from Lekki, Lagos, Nigeria where former housemates watched the show.

After a brief chat with housemates, show host, Ebuka Obi-Uchendu, announced Nina to be the first of the finalists to be evicted. Nina the youngest of the housemates is the love interest of popular housemate, Miracle.

Tobi denies being a gossip

On stage, Ebuka took Tobi to task, asking him if he was the gossip he has been called by many viewers. Alex also was questioned by Ebuka, who demanded to know if her words can be relied on because after announcing that she wasn’t looking for love, she fell for fellow housemates Leo. She also has been linked to Tobi.

Alex in her frank way answered that she shouldn’t be listened to when it comes to love.

Nina who looked resplendent in a black number, dumped her boyfriend on stage. The first question from fans to Nina on stage, was on her future with Miracle and she replied that she had picked him over her now famous Imo based boyfriend, Collins. “I’ve always said, that i will continue with my relationship with Miracle”, she said.

When Ebuka followed up by asking what happens to Collins, Nina dismissed the question  by saying she will deal with the issue when she gets to Nigeria.

Teddy A and Bam-Bam remain coy on relationship status, same for Lolu and Anto

Back at the viewing centre in Lekki, Lagos the evicted couples chose to be coy about the status of their relationships, when asked by Bisola. Lolu said he and Anto aren’t yet officially an item. For Bam-Bam, she simply asked fans to “keep watching this space”, if they want to know what’s happeing between her and Teddy- A.

When it was Alex turn on stage, she denied being friends with benefit  with Tobi. The former banker  housemate, who has been trending online, with girls talking about how his eggplant was put on display in the Jacuzzi, held on to Alex when she was announced as the second housemate to be evicted in the grand finale.

But she told Ebuka on stage, that she still was interested in Leo. She however warned that she wouldn’t call Leo, pointing to the fact that she will not be making the first move. But hey! we are talking about Alex, who on this same night advised that Ebuka and viewers shouldn’t take her words seriously when it comes to love and attraction.

In what could be described as the most shocking of the night’s evictions, Tobi who looked dapper in his all black ensemble was evicted and didn’t make into the last-two.

When asked if he would reconcile with Cee-C, he reiterated that there is a  chance for them to be reconciled in the real world. He also didn’t deny wishing that he and Alex could take things further. But with the caveat that, if only things don’t work out between Alex and Leo. Recall that Leo, who lost his mother after he left the House has said he has a female friend, with whom he wants to build a relationship with.

Main act of the night, Davido burned up the stage with his energetic performance. Guinness Book of World Records, dancer, Kaffy along with her team of dancers,  also gave a good account of themselves.  Rave act, Mr. Real didn’t disappoint with the performance of his street bangers, including “legbegbe”.

170 million votes after, what fans had to say:

After 170 million votes in 85 days and 30 million in the last week of the show, veiwers were quite emotional and upfront about with their comments. Facebook user Amarachi hailed Miracle’s emergence as winner, stating: “Go Miracle. Yeah!! I for faint if Cee-C was announced winner”. Another fan, Bolatito said on her page: “Victory at last, Miracle wins”. Baba Dee, a strong supporter of Cee-C’s on Facebook was called out, when she lost. But he wasn’t moved, replying, “The point is, against all odds, that strong babe came second. Can you believe that? Where was all your super gossips Tobi and Alex”?