Speaking earlier, Ojougboh told the APC National Working Committee (NWC), and governors of Kano, Umar Ganduje, Kogi, Yahaya Bello and Kaduna, Nasir El-Rufai, among others others, who received them that they decided to collapse their political structure into the APC after the unfavorable Supreme Court judgement of 2017.

“Since the judgment was against us, we had spread ourselves into other political parties with the aim of determining where we will pinch our tent. I was sent to the APC and, after submitting my result after seven months of our study, we all decided to join the APC. We are here to formally collapse our political structure into the APC,” Ojougboh said.

In his response, National Chairman of the party, Chief John Odigie-Oyegun, said although they are free to contest for any position, they must, however, start their journey into the ruling party by registering at their wards.

Oyegun said: “I want to, on behalf of the APC, welcome you. This is the first time that this magnitude of event is happening since the amalgamation and since the APC came into being. We have received very important persons but this is the very first time we are receiving a total party into the APC.

“It was clear and there was no doubt about it that there were two PDP but the issue was; which was the real PDP? This went through our judicial system and somebody had to win and one side won.

A few days ago, I said the APC is a strong party, a living party and a vigorous party. You have given proof to that statement and the fact that you cannot join somebody who is losing a battle. Fortunately, we have an ongoing registration and so, you are going to register as members, with the same status, with any other member of the APC.

You are men of quality and so, it is easy to fit into the populace and play your role in the APC.

“We are going to start the process of congresses and primaries in a couple of weeks and our constitution made it quite clear that the day you join, you become a full member. So, those of you who have ambition and are popular at the grassroots will be able to immediately participate and be able to integrate as quickly as possible.

“I must also emphasise that it is good that we are having this exercise, today (yesterday), but our constitution provides that you must go back to your wards and register formally, as members, because APC is based on local representation right up to the unit level.”

Secretary to the Government of the Federation (SGF), Boss Mustapha, also commended them and admitted that they will bring value to the ruling party. We consider it auspicious because the narratives and trajectory of what will happen in 2019 has been defined.

“I want to thank you for taking this bold decision and to assure you that you have come home and some of you will have cause to play politics together at different levels. I believe that, by the virtue of the calibre of person you are, you will add value to the APC,” Mustapha said.
Similarly, Kano governor, who spoke on behalf of this colleagues, said the ruling party has taken the greater part of the major opposition party.

“We have taken the biggest faction of the PDP and I can say it is our luck that we are taking a better part of the PDP today (yesterday).

“There is no better history we can learn from than what is happening today. Therefore, you who have come today (yesterday) and those who form the party now have the same status.

“The only difference in future is the level of commitment and that in veteran politicians, I am sure that the terrain is not new to you because it is a terrain that you are used to. You know what it takes to build a string political party. So, we can say you have come back home because this is where you were supposed to belong,” the governor added.

In his reponse on behalf of the defectors, senator Gada, said: “We have joined the party to make it a formidable fighting force not only in Nigeria, but in Africa.” We are here and we arrived heavily; with absolute and total commitment to work with you in the most civilized manner, in the best democratic process, to take this country to the next level.”

Meanwhile, the party has shifted the May 14 date for its national convention.
APC spokesman, Bolaji Abdullahi, disclosed this to newsmen, after a meeting between some governors of the party and the National Working Committee (NWC), led by the National Chairman, Chief John Odigie-Oyegun. He said some of its governors raised the issue of the Muslim fast, which will commence next month.

“The observation was that the timetable, as it is currently constituted or composed, was determined because of the Ramadan and we want to be sensitive to the feelings of Muslims, who will be fasting in the month of Ramadan,” said Abdullahi. 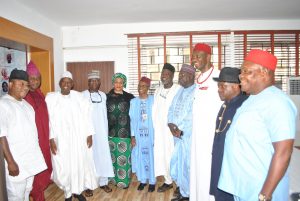