The Duchess of Cambridge has today given birth to her third child – a boy weighing 8lbs 7oz – on St George’s Day.

Kensington Palace announced that the baby was born at about 11am, after Kate was taken by car before 6am to the private Lindo wing of St Mary’s Hospital in Paddington, London.

The birth appears to have taken place without complications. The baby is fifth in line to the throne, the Queen and the Duke of Edinburgh’s sixth great-grandchild and a younger brother for Prince George and Princess Charlotte.

Prince William was present for the birth, and both Kate and the child were ‘doing well’, according to a palace spokesman. Senior members of the royal family were said to be ‘delighted with the news’.

Royal watchers had been expecting a swift delivery at the Lindo Wing, with the child sharing a birthday with William Shakespeare and Lady Gabriella Windsor, the daughter of Prince and Princess Michael of Kent.

‘Her Royal Highness and her child are both doing well. The Queen, The Duke of Edinburgh, The Prince of Wales, The Duchess of Cornwall, Prince Harry and members of both families have been informed and are delighted with the news.’

The baby’s title is HRH Prince Cambridge. Earlier, excitement was building outside St Mary’s Hospital, where some fans had been camped out for 15 days hoping for a glimpse of the royal baby.

The timing of today’s announcement that Kate had gone into labour, falling on St George’s Day, added to the occasion for waiting royalists outside.

John Loughrey, 63, who is part of a group who have been camped outside the hospital, said: ‘We are so pleased. We have been here for 15 days. I’m so pleased it’s St George’s Day. St George himself would be very pleased if the baby’s born today.’

Mr Loughrey, from Streatham, South London, said he plans to celebrate the birth with English flags and a portion of fish and chips.

‘It doesn’t matter if it’s a boy or a girl as long as it’s a healthy baby and a healthy mother,’ he said. ‘It’s very good for our country and of course Her Majesty the Queen.’

Another member of his group, 82-year-old Terry Hutt, also welcomed the news.

‘It’s fantastic to have another newborn baby,’ said Mr Hutt, who turns 83 at the end of the month and was hoping to share his birthday with the new royal. ‘If they were born on my birthday, I would have got a birthday cake.’

The group were talking in front of their make-shift camp, including royal memorabilia and a Union Flag tent.

Highly-trained midwives were also on hand, while experts were waiting in the wings in case of an emergency. 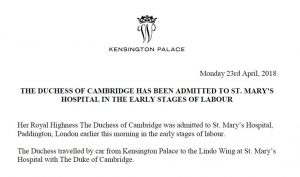