President Muhammadu Buhari on Tuesday rationalised the treatment of retired Chief Justice of the Federation (CJN), Justice Walter Onnoghen, saying that he dealt with him for having in his possession undeclared foreign and local currencies.

Speaking when he received some Yoruba leaders led by Asiwaju Bola Tinubu at the presidential villa, Abuja, he said he had to do what he did to the former CJN even though reluctantly. 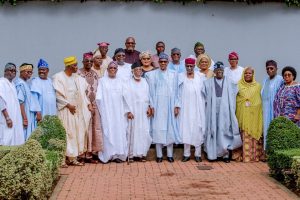 The President said: “But anybody who cannot account for what he has and for refusing to declare it, we will have to do something about it.

“I will tell you as, that was why I had to deal though reluctantly with the former Chief Justice because there were millions of dollars, euros not to talk of naira which were not declared.

“I wonder what sort of conscience some of us have. How can you seat and preside over and lock people up for years and even sentence some to death and yet you are not doing what the constitution said you should do by occupying that vital institution.

“So, I stopped getting worried so much, sorry to admit it, when I found out that I could play hoop, step and jump. What I mean is that if it is America, they will do it this way. If it were in Europe, they will do this way but if you go there after 250 to 400 years, how old are we?

“So I realize that I don’t want to go back to into detention again.”

Buhari, who recalled how as a military leader he clamped suspected looters into detention until they proved themselves innocent, said that these days, suspects deny their property until they are shown their bank accounts.

The President maintained that he had decided that property seized from suspects would be sold and the money kept in the treasury to prevent future administrations from returning them to their owners.

Buhari added: “Now, what I do is when a person cannot justify what he has or fails to declare as the constitution specifies, some of them swear to Almighty God that their property doesn’t belong to them until we show them their bank accounts and their companies then we have some peace.

“So, we are recovering as much as we can under the system and this time around I said the properties will be sold and the money put in the treasury.

“The last time they were giving back their properties but this time around whoever comes after me no matter how generous he is, he cannot take money from the treasury give it to individuals.  It will be impossible.”

The President also recalled his campaign promises and the effort his administration had made to meet them with success.

Buhari thanked the group for the visit, saying: “So, institutions like yours when you have secured your constituency constitutionally and materially, you can help establish this country. And really this country needs you and you need this country with the future generation because of the population explosion we are going through and the limited resources and the deficits of infrastructure.”

In a text read by Chief Olabiyi Durijaiye, on behalf of the group, told the President his group helped to elect him into office.

He said: “We are proud of our contributions to your victory through the Yoruba Summit Conference held at the University of Ibadan International Conference Centre on January 29, 2019. There, we passed a well-applauded motion urging all the people of Western Nigeria origin of voting age to vote for your re-election by virtue of your people-oriented and welfarist APC political programmes and performance and performance.

“We are happy the people complied.