At exactly 2:31pm, President Muhammadu Buhari, signed the ‘Not Too Young to Run’ Bill into, with a plea to the youths to suspension their ambition for the number one seat of power till after 2019.

This was in fulfillment of his promise to append his signature to the bill as announced in his Democracy Day address to the nation, last Tuesday.

He described the Bill as a land mark law noting that the bill showed that the youth can achieve anything they conceive if they work hard at it. 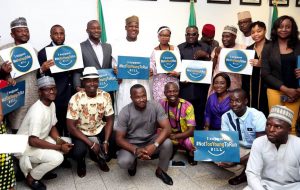 The new law lowers the constitutional age limits for aspirants to presidential and legislative positions in the country, as clamoured for by majority of younger Nigerians.

It reduces the age qualification for the office of the President from 40 years to 30 years; House of Representatives from 30 to 25; and State House of Assembly from 30 to 25.

The signing took place at the Council Chamber of the Aso Rock Villa, in the presence of the NTYTR group of under-35 young Nigerians drawn from across the country and led by Mr. Samson Itodo.

In his remarks after signing the bill, President Buhari canvassed for additional amendment to reduce the age limits for aspiring governors and senators, which was proposed but not reflected in the final bill he just signed into law. 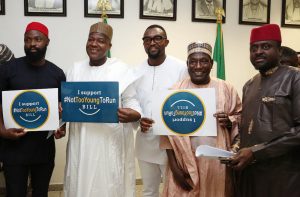 He said the signing of the bill was not the end of the journey but the beginning of more work to be done to get younger persons into government.

He further charged young Nigerians not to relent in pursuit of excellence in their various endeavours. He however begged them not activate their quest for the presidency until after his reelection in 2019.

Among the NTYTR group delegation were the President’s daughter, Halima; Vice President Yemi Osinbajo’s daughter, Kanyisola as well as Aisha, the daughter of President Buhari’s Chief of Staff, Abba Kyari.

Also present were the sponsors of the Bill in the Senate, Sen. Abdulaziz Nyako and in the House of Representatives, Hon. Tony Nwulu, both of who pledged additional legislative support to the group, as well as Minister of Sports and Youth Development, Solomon Dalung, and some presidency officials.

Speaking for the NTYTR group, Itodo urged the President to insist on internal democracy in particularly his ruling party, the All Progressive Congress; and to facilitate a provision that will reserve some slots specifically for young persons in faithful and progressive implementation of the new law.

He praised the President and the Vice President for encouraging the bill and noted that Buhari would be positively remembered by posterity for being the Nigerian leader to sign into law the NTYTR Bill.

The post Buhari signs ‘Not Too Young To Run’ Bill into law, begs youths ‘don’t run against me’ appeared first on The Sun News.