With the signing of the Memorandum of Understanding between the Ngor-Okpala, Imo State-born musician and the NDLEA, Guchi automatically became the NDLEA Anti-Drug Ambassador. 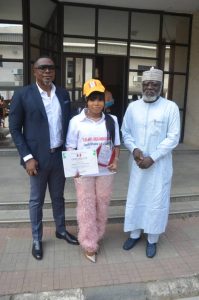 Speaking during the signing ceremony, Abdallah said it was unfortunate that Nigerians have continued to shy away from the problem of drug abuse.

The NDLEA boss disclosed that the agency is involving youths in the country in programmes and activities of the NDLEA aimed at de-escalating the effects of drug abuse and drug trafficking.

Abdallah also disclosed that youth involvement in drug control is cardinal since the youths constitute the most vulnerable groups to drug abuse.

“Youth involvement in drug control is cardinal since the youths constitute the most vulnerable groups to drug abuse,” Abdallah said.

On her part, an elated Guchi assured that she was going to use her talent as a musical star to reach out to the all youths.