The prestigious Summit Restaurant at The Dome in Abuja came alive on Wednesday as the crème of the Nigerian high society converged to celebrate, and welcome, the Deputy Chief of Mission of the Embassy of the United States of America, Her Excellency, Kathy Fitzgibon to a dinner.

Ambassador Fitzgibon returned to Nigeria recently on another tour of duty. 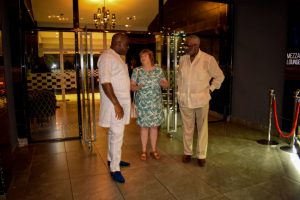 She was entertained to a light evening of good music with dinner supplied by Chef Prince and his team at The Summit Restaurant.

Received on arrival by Senator Ben Obi and Chief Executive of The Dome, Dr. Obiora Okonkwo and his wife Gina, Amb. Fitzgibon spoke glowingly of Nigeria and said it was good to be back to the country. 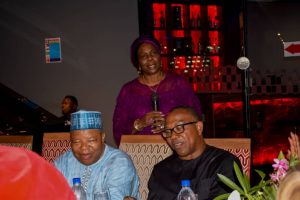 Also present was former Minister of National Planning and Economic adviser to the president, Prof. Osita Ogbu and his wife, former Member of the House of Representatives, Hon. Chudi Offodile, former Deputy governor of Ekiti State, Senator Biodun Olujimi, former Minister of Health, Prof. ABC Nwosu, Former Deputy President of the Senate of the Federal Republic, Senator Ibrahim Mantu, Senator Uche Ekwunife who represents Anambra Central at the Ninth senate, and former governor of Edo state, Chief Lucky Igbinedion among many other friends of The Dome. 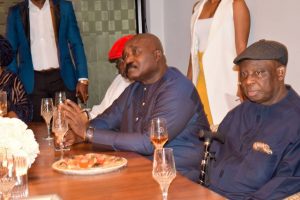 The evening was ignited with light music which led the elite audience into a cocktail of choice wine and finger foods.

Addressing the audience, Dr. Okonkwo spoke of the transformation of The Summit Restaurant at The Dome, restoring it to position as a celebrity hangout. He urged them to take advantage of the improved services and offering at The Dome to enjoy maximum entertainment.

According to him, the transformative work at The Dome came with it some added options for relaxation and body therapy management including The Camelot Spa, The Noni’s Pizza, The Bowling Alley for games, The BodyTrust Health and Fitness Gym and Bar, The Paradiso Garden for cool and breezy outdoor experience as well as The Francis Hotel which offers a luxurious option for business and leisure travelers and The Twins Café which offers options for work-on-the-go.

In his short speech, Sen. Obi, who is popular as Ojeligbo, said it was good that Amb. Fitzgibon was back and had re-connected with old pals. While welcoming her, he said Nigeria will always be home to Amb. Fitzgibon. 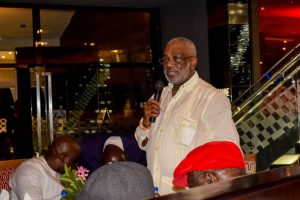 Amb. Fitzgibon, who was obviously impressed with the outlook of the shindig put together in her honour, said she was glad to be welcomed back to Nigeria in a warm and endearing manner