Senate President Bukola Saraki and House Speaker Yakubu Dogara on Wednesday morning met with President Muhammadu Buhari, who disclosed to them his plans to effect some ‘reorganisation’ as part of measures to beef up security nationwide and to stop the kind of mass killings that took place in Plateau State over the weekend.

The National Assembly had on different occasions called on President to overhaul the security architecture and possibly his top security chiefs too. 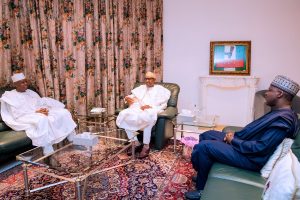 However details of the planned reorganisation was not made known by the National Assembly leaders who spoke to the press after the meeting with Buhari.

The calls increased after the recent Plateau killings in which over a hundred persons have been reported dead.

But speaking with journalists at the end of the meeting which held at the Aso Rock Villa, Saraki said they commiserated with the President over the tragedy.

This is even as he and the Speaker  received briefings from him on what was being done to arrest the situation, some of which could not be disclosed to the public.

They however, stressed that it was necessary to ensure that such deadly attacks and mayhem are a thing of the past.

Both men said it important so that the factors and conditions that escalated the Boko Haram insurgency would not be repeated.

Dogara said the President “briefed us on what he saw first hand when he visited Plateau yesterday and measures he is putting in place to ensure that we do not have a relapse or a recurrence.

“These are very sober moments for all of us in a situation where people in hundreds are continued to be killed and we can no longer tolerate this kind of situation as a government. Whatever it is we must not lose the fight against violence because we can’t lose that fight and still keep our civilization.

“If you go to the North East you can see the level of devastation caused by Boko Haram everything resembling progress from schools to hospitals to government institutions, everything has been pulled down. And we don’t want a replication of this all over the country.

“The president has taken enough steps, these are security issues, there are not matters that you can discuss but he has told us what he is doing, the reorganization that he plans to put in place to ensure that these don’t happen (again).”

He also advised the people of Plateau, Benue, Zamfara, Taraba and other communities faced with similar crises, to seriously think the issue of securing our communities while living in peace must be taken as a collective project.

Both men told journalists that they plan to pay a visit to Plateau State to condole with the people, as the President had done, and also to see things for themselves.

Saraki said: (the president) “explained how steps are being taken to forestall reoccurrence and restore sanity because this is a great concern to him and to us also. To see what can be done with NEMA and security agencies, we will all work towards it. Nobody is happy with it and we will all come together to ensure that we restore sanity.

“We commiserate with all families, it is our own intention to also go and pay our own condolence visit to the people of Plateau.

“Our general appeal at the end of the day is that we all live together in peace and harmony and we will continue to do our best to see that this kind of thing does not happen again.”