The spirit of Ochanya Elizabeth Ogbanje came back alive in Abuja on Thursday when a group of CSOs, members of the Unity Schools Old Students Association (USOSA),  old girls of FGGC Gboko and the Idoma Youth Action Group marched in demand for justice for the late teenager. 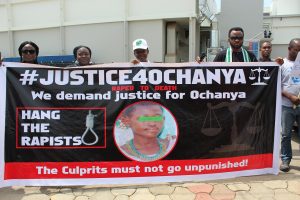 Also on hand to speak before the peaceful protest was Ukan Kurugh, whose social media advocacy started the chain of events that resulted in the nationwide condemnation of the barbaric abuse of Ochanya who was a student of FGGC Gboko.

All those at today’s march were determined to call the attention of critical stakeholders to need of ensuring that Ochanya’s family gets justice and is seen to have gotten justice on time.

Also gladdening is the fact that students of FGGC Gboko staged a protest in their school to call for justice for Ochanya.

Many arrived the Unity Fountain start-off point of the peaceful march even before the 7am designated time. And the vigor to march for justice was strong all through, with protesters bearing placards  marching to the Federal Ministry of Justice. Though the minister of Justice and AGF,  Abubakar Malami,  wasn’t on hand to speak with protesters, it didn’t dampen their moral.

A high ranking staff of the ministry addressed protesters and off they went in one accord to the National Human Rights Commission where they reiterated their demands for a speedy trial of Andrew Ogbuja, the polytechnic lecturer accused of  molesting the late teenager from the age of eight.

Calls were also made for the arrest of Ogbuja’s son, who is currently at large.

Thursday’s protest ended with a visit to NAPTIP headquarters, where the Executive- Secretary of the agency, Dame Julie Dolie told protesters that the Markurdi office was directed to take action and she has called a meeting on Ochanya’s case for Friday. She assured that NAPTIP would see the case to the end.

Critical stakeholders who collaborated on today’s march are to come up with plans to keep the demand for #Justice4Ochanya alive beyond today.