In the last few weeks, Nigerians and industry experts have become dumbfounded and taken aback by the charge of ‘slow pace of work’ levelled by the House of Representatives Works Committee chairman, Hon. Abubakar Bichi, against Julius Berger, a company reputed essentially for its consistent history of successful project delivery.

At the public hearing conducted by the Works Committee of the House of Representatives in Abuja, and in response to the Committee chairman, Hon. Abubakar Bichi’s charge of ‘slow pace of work’, the Managing Director of Julius Berger Nigeria Plc, Dr. Lars Richter, explained that all things being equal, Julius Berger is “working on schedule, meeting and exceeding planned construction milestones and focused on delivering the project as contracted”.

On the Abuja-Kano Road project, Dr. Richter submitted that all requisite human and technical resources, even new technologies, have been mobilised and deployed along the whole length of the project corridor to ensure successful completion of the works as duly contracted. 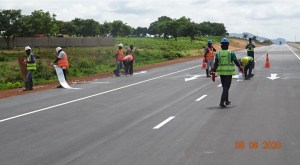 However, the Chairman of the House Works Committee subsequently led his colleagues on site visits to some of the ongoing road works in the North-west geo-political zone, including the Abuja-Kano Road project. Bichi was later quoted that, out of N155 Billion cost for the Kano-Abuja Road, N70Billion has been released to Julius Berger, adding that from Abuja to Kaduna which is 165kilometers, only 10km of work has been done.

Bichi also said that of the 75 kilometers project section from Kaduna to Zaria only 6kms of work has been completed; and in the 157 kilometers from Zaria to Kano, only about less than 20kms has been completed; meaning that only about 10% of the works have been implemented. The contractor, however informed the House Works Committee at the public hearing that the project works had progressed to 49%, stressing that the onus of proof that only 10 % of the works had been done rest on the person(s) making the assertion.

The question then arises as to which scope of works is being used in the computation being applied to determine Bichi’s 10% and the contractor’s 49% claims respectively on the progress allegedly made on the project thus far? It is on this note that Forefront sought to get a more balanced empirical, independent and urgent clarification to ascertain the actual progress that has been accomplished on the Abuja-Kano road project.

It is widely acknowledged by the Nigerian public and especially so in the built industry, that Julius Berger as fondly called, has a dependable history of delivering excellent and quality-rooted infrastructures in Nigeria. Some of its projects include the Eko Bridge in Lagos which was built in 1965 which establishes the company’s professional capabilities and project delivery prowess as recorded in different parts of the country.

Based on the prowess so far displayed by Julius Berger, it therefore begs the question why the Abuja-Kano Road project is attracting so much adverse and disruptive interest as being propounded by the House of Reps Committee on Works and attempting to situate it in the public domain?

The above question, amongst other parameters, set Forefront’s investigative enquiry in motion with a view to unravelling the facts of the controversy surrounding the Abuja-Kano road project.  Checks that were independently verified and empirically clarified over the status of the Abuja-Kano Road works and other priority projects being handled by the construction giant, indicate that the House is likely to being in pursuit of a selfish agenda and do not possess the technical know-how to carry out an evaluation that would stand the test of time. This much was revealed based on enquiry sought to clear the opaque allegations aimed at casting aspersion on the Abuja- Kano Road project thereby distracting the public.

Findings by Forefront indicated that while the payment of about N70 billion referred to by Hon Bichi was made to the contractor, it was discovered it include the initial 15% (i.e. about N23billion) of the project cost of N155 billion that was paid as advance payment for the contract. An official at the Federal Ministry of Works, who does not want his name mentioned, told Forefront that this is a common contractual practice in engineering as he explained that the figure (N23Billion) is already being paid back periodically by the Julius Berger being the contractor to the client which is the Federal Government of Nigeria. The ministry source further said that beside the N23Billion advance payment which is being deducted or paid back by the contractor, the balance of the N70billion is the actual payment for works duly executed and properly certified by the client, and even further certified twice by international consultants under international due diligence standards, before any payment is made to the contractor. He said this is what the House of Reps Committee is refusing to accept for reasons difficult to understand and comprehend.

“I can tell you that, this is one of the best roads in Nigeria as the contractor has brought in novel equipment which guarantees strength, speed and environmental friendliness. This is the first time, we are having a Cold Recycling Methodology Equipment being brought into the country by a contractor. The technology will guarantee the road to last for a minimum of 30 years before the next maintenance is expected to be carried out like in the United States”.

To further give substance and relevant community input to our report, Forefront visited the site as well as the communities along the project corridor to sample their opinions on the progress of the project. Our visits to the communities revealed that at certain portions of the road project, electrical poles are still standing thereby disrupting the project right of way even at the moment thereby suggesting that there are still pending issues of compensation for relocation of services and clearance of right of way for certain parts of the project. This was explained by the Ministry official, who said that there are still some pending issues to be resolved relating to compensation which the government (client) is working to resolve to enhance speed of project implementation by the contractor. Unfortunately too, the outbreak of COVID-19 that slowed down activity in every sector also posed some challenges constraining effects against supply chains, equipment and staff movement for the contractor thus affected negatively the agreed scheduled work plans.

When contacted, the contractor, Julius Berger Nigeria Plc, insisted that as a company’s policy, it has a strict compliance to confidentiality clause in its contract with its clients and therefore refused to oblige inquiries from Forefront but instead directed us to the Federal Ministry of Works for any information we need on the Abuja-Kano Road project and any other of their works under the purview of the Ministry.

However, Hon. Bichi was reported in the media (not Forefront) to have said that; “the unit cost of the project per kilometre stands at about N450 million. This is far from what the zonal Director of Works for North West, Engr. Esan Folurunsho and the Engineer Representatives supervising the project, Engr. James Zira said as they enthused that “the materials being used for the road project was cheaper for Nigeria”.

On the whole, there are still a number of clarifications needed to be made on the on-going Abuja-Kano Road project. For instance, what is the actual nature of the contract signed for the project? This question can only be answered by the contract-awarding authority, that is, the Federal Ministry of Works. Attempts made to reach the Minister of Works, Mr Raji Fashola were unsuccessful as he was hardly on seat as he was said to be busy on project supervision and inspection.

Similarly, the public needs to be told by the Federal Government if the contract is rehabilitation or total  reconstruction of the entire project from Abuja through Kaduna, Zaria to Kano. What work is the contractor expected to carry out?

Expectedly, Nigerians will also want to know whether Julius Berger the contractor is actually working according to the schedule agreed by the parties to the contract. If the answer is yes, what then is the basis for all the furore being hyped against the on-going Abuja-Kano Road project by the House Committee on Works? Based on analytical perspective, a relevant suspicion logically arises whether by any circumstance, it is possible that there are pending and unresolved contractual issues that are hindering the scheduled and operational execution of the project works.

There are however observed disruptive breaks in the progressive flow of the works occasioned by noticed electrical poles standing in the right of way on certain portions of the road project which is constituting a hindrance to project progress, beyond the control of a contractor.

A sincere, honest and patriotic clarification of the above issues to the concerned public will go a long way to douse the unhelpful misconceptions and to a large extent, falsehood that have dogged and polluted the narrative of the Abuja-Kano Road project in the recent time.

Whatever the considerations and interests at play on the road project, the interests of the people and the strategic long term socio-economic well-being of the nation should be prioritised and allowed to prevail. If Nigerians generally are agreed that the Federal Government, in its wisdom, has chosen and employed a most qualified engineering contractor for the Abuja-Kano Road project, it behoves all stakeholders to reasonably give truth, goodwill and peace a chance to ensure the successful actualization and delivery of the project for the beneficial use of all citizens.

As Nigerians watch the unfolding scenario, the onus of clarifying and clearing the misconceptions and presumptions surrounding the status and direction of the project rests squarely on the stakeholders and managers of the project.

May the stakeholders handling this all-important project muster the good conscience and courage to avail Nigerians a successful completion and delivery of the Abuja-Kano Road project.