Former England captain David Beckham has predicted the Three Lions will reach the final of this summer’s World Cup, alongside Lionel Messi’s Argentina. 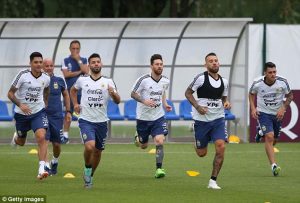 Gareth Southgate’s men kicked off their campaign with a last-gasp victory over Tunisia on Sunday, putting themselves in a strong position to qualify for the knockout stages.

And Beckham, who never made it past the quarter-finals as a player, was clearly given confidence by the performance.

‘I believe Argentina will play against England in the final,’ the 43-year-old said at a promotional event in China following the game.

‘I think obviously my choice would be England to win the competition, but that’s me being biased and passionate about my country,’ he added.

However, the former Manchester United and Real Madrid star, who famously saw red against Argentina in the 1998 World Cup, warned it will be a tough road ahead.

‘I’m very happy that we won the first game in the group,’ Beckham continued.

‘England is a very young team, they don’t have a lot of experience yet and the journey of the World Cup will become harder and harder because there are many good teams in the tournament.’

England will look to secure qualification for the last-16 when they face minnows Panama on Sunday afternoon.

Argentina, who could meet England in the semi-finals or final, drew 1-1 with Iceland in their first game and take on Croatia on Thursday.