Rising from its closed door session, President of the Senate, Bukola Saraki, said the lawmakers revolved to declare the IG persona non grata, stressing that he is not fit to hold any public office in Nigeria or any other country.

Saraki recalled that a court, which the Police boss approached over his earlier invitation by the Senate, ‎ruled that the lawmakers had the powers to summon him or any other public officer. 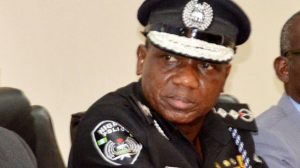 The Senate President said the lawmakers also resolved that the leadership of the chamber would make further considerations on the matter.

Culled from The Punch