One of the lead contenders for the position of Speaker of the House of Representatives in the 9th Assembly, Chike Okafor (APC-Imo) on Monday harped on the need for All Progressives Congress (APC) to avoid the pitfalls which led to the loss of Speakership position to Peoples Democratic Party (PDP) in 2015.

Okafor who spoke during a Media chat called ‘Hot Seat’ held at the instance of House of Representatives’ Press Corps at the National Assembly complex, Abuja, specifically urged APC leadership to jettison the choice of Femi Gbajabiamila from South West and Lagos State since the Vice President Yemi Osinbajo is from same geopolitical zone. 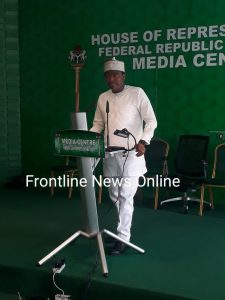 While acknowledging the legislative credentials of Gbajabiamila as a 5th term lawmaker and his vast experience as minority and majority leader in the sixth and seventh assembly, however stressed out he need to prioritize national unity, national interest, social justice and equity in order for other sections of the country to feel the pulse of inclusion of federating units.

The one-time Commissioner of Finance, banker and incumbent Chairman, House Committee on Health Services, observed that the laws of the land does not foreclose the opposition parties from fielding candidate for the principal officers of the National Assembly, hence called for resolution of all issues of contention raised by other actors from the marginalised geo-political zones.

While responding to questions bothering on purported intimidation by Comrade Adams Oshiomhole, APC National Chairman, the Imo lawmaker who dismissed the report argued that Oshiomhole has at no time threatened him and other lawmakers who have expressed interest in the race.

He further argued that as a member of the APC South East caucus, he was denied the slot of Deputy Majority Leader in the 8th Assembly because he was a first timer, adding that “I am back and ranking.”

Okafor who formally communicated his intention to vie for the position for the Number 4 citizen ahead of the party’s adoption of Gbajabiamila, noted that zoning the Speakership position will increase APC’s fortune in the South East in 2023, adding that the geo-political zone was the only place where the ruling party recorded over 100 percent votes in 2019 general election, above the 2015 general election.

While responding to question on whether he will dump the ruling party if the APC leadership fails to acede to his demands, Okafor who joined the party in 2013, vowed not to work against the party during the election of the principal officers during the inauguration of the 9th Assembly, just as he appreciated various benefits accorded him by the ruling party since he started his political career.

“If this agitation and push we are making do not work, I will not work against the party in June,” he assured.

I salute you gentlemen.

Let me start by expressing my gratitude for this opportunity to appear at the House of Reps Press Corp “Hot Seat” Media Interaction. As you may already know, I have formally declared my aspiration for the position of Speaker of the House of Representative, 9th Assembly.

Today, I have come to interact with you as Members of the fourth estate of the realm and therefore key stakeholders in our country’s development and promotion of good governance.

The issue of zoning and election of Principal Officers of the National Assembly is about the most important talking point for most legislators and other critical stakeholders, the media inclusive. While the position of the Senate President has been zoned by our party, the All Progressive Congress (APC), to the North-East, we are aware that the party is yet to zone the Speakership of the House of Representatives to any zone.

You are already aware of the clamour from across the country for equitable distribution of the principal offices of the National Assembly and most importantly, the recent push by several APC support groups from across the Northern states and the South-East calling on the party leadership to zone the Speakership of the 9th Assembly of the House of Representatives to the South-East.

In 2015, the APC denied the South-East principal-officer positions in the National Assembly on the ground that we did not have a ranking member under the APC. I was slated for leadership position then, but was eventually denied the position of Deputy Whip because I was a first timer, now I am back and ranking!

Gentlemen and ladies let me use the opportunity of my appearance here today, to state that I have continued with consultations as I am still in the race for the Speakership of the 9th Assembly of the House of Representatives.

We are aware of some of the things you may have heard before now and the name already put in circulation as the automatic beneficiary of the Speakership position, and seeming exclusion of the South-East. It is however unthinkable that the APC will abandon the more than 400,000 of its supporters who voted for the party across the South-East, to cede the Speakership to a zone that already has the Vice President, the National leader of the APC and multiple grade-A appointments.

A ruling party doesn’t just look at the numbers alone; it also looks at National Interest; it looks at social justice; it considers political stability and harmony in the body politics; it feels the pulse of the Nation and weighs in on equitable inclusion of federating units of the country in line with the provisions of the constitution of the country and the party, even as it affects sharing of political offices and looking at all these indices, as a party, we have not given the South-East a fair deal! Not yet.

A critical review of the last general election would easily indicate that the South-East holds immense political prospect and our party needs to initiate efforts to bridge the inclusion gap as it affects the region and pave the way to extract some political capital from the region come 2023 and there is no better way to start than to zone the Speakership of the House of Representatives to the South-East.

When we joined the APC, we assured our people that we joined the party so that they could reap the dividend of mainstream politics. In the last four years we have comparatively little to show for the said dividend. But we soldiered on. In the last presidential election, we braced the challenges; dared the status quo, swum against the tide, staked our pride, put our lives and resources on the line just to give the party a strong foothold in the South-East. 403,000 votes for President Muhammadu Buhari in the 2019 Presidential election may not seem a big deal, but there is no geo-political zone in Nigeria that doubled its vote haul of 2015 in 2019 and improved on it performance in 2015 by more than 100% except the South-East!

Supporters of the party in the South-East also succeeded in whittling down the outrageous figures of the PDP in the region unlike the 2015 episode. In 2015 presidential election, the PDP scored approximately 2.4m votes while the APC polled 198,248 votes. But in 2019, the PDP dropped to 1.6m votes while the APC more than doubled its votes to 403, 958 votes. These efforts, speak eloquently of loyalty and diligent commitment to the party!. Our party must embrace the culture of political inclusion to be able to enlarge the space for effective leadership.

We cannot sustain the capacity of a ruling national party with the attitude of a sectional party.

We should be the people’s party; the party entrenching and building democratic landmarks instead of the party that is deepening the lines of sectionalism. President Muhammadu Buhari inspires hope not just to some of us, but to the entire country. Following his victory, he declared that his victory is for all Nigerians and promised to run an all inclusive government. It is expected the entire gamut of the party should align with the President and embrace the politics of inclusion. Whatever be the case, I am certain the leadership of our great party would desire the best for the leadership of the 9th Assembly and I come with requisite competences drawn from both private and public sector of our society.

From my training as a senior banker in the organised private sector to my public sector experiences as Finance Commissioner of my state and member of Federal  Allocation Accounts Committee, of the federation, (FAAC) for more than three years which gave me opportunity to interface with vital finance, revenue generating and economic agencies of the country like NNPC, Federal Ministry of Finance, Revenue Mobilisation and Fiscal Commission, Debt Management Office, (DMO), Securities & Exchange Commission (SEC), FIRS, CBN, and of course the Finance Commissioners of the other 36 states, built my capacity in no mean measure.

Legislative experience is very important, but good training, vast exposure to the entire workings of the economy, through years of playing in the organised private sector, and public sector, from the state level for three and half years, and now four years as a federal legislator would give me an edge over other contestants to the office of Speaker.

By my training and exposure, I have a better grasp of the economy than the others, and thus will be able to help steer the 9th Assembly, House of Representatives in line with current economic realities and in the process lead the Assembly in making laws and motions that will match up to current realities on ground, and further reinforce and fast track Nigeria’s economic recovery and growth plan.

I will be running to win and not for fun. And it might interest you to know that my acceptability cuts across board right from my state to the chambers.

Thank you very much.