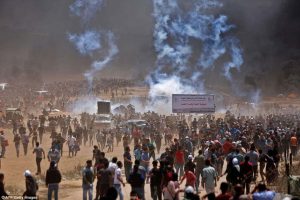 Scenes from violent protests by Palestinians

The above was the title of a letter I wrote to the editor and published in Forum Newspaper (defunct) when I started my journalism practice in 1992.

The newspaper, by the way, was owned by the then governorship candidate of the Social Democratic Party and present National Chairman of the APC, Chief John Odigie- Oyegun.

In that letter, I posited that there can never be peace in the world if the Palestinian question is not addressed and events playing out presently has further made it one of the truest prophesies.

I have restrained from commenting on the movement of the U S embassy from Tel Aviv to Jerusalem because of my christian belief. I do not want to be seen to be questioning divine injunctions as the bible is clear on who owns the city.

However, I’m moved to say my own on the issue because of the bloodshed in the Gaza strip as a result of the opening of the U S embassy in Jerusalem.

I am a firm believer in the sanctity of life since scientific breakthroughs have not been able to create a living human being with blood flowing in his/her veins. This translates to; you must not take what you can’t create.

Also, I believe in equal right and justice for all, as the only way to solve the problems of the world.
This takes us to the wanton killings of Palestinians by Israeli forces since the announcement by the US President, Donald Trump that the country’s embassy would be moved to Jerusalem and the resultant protests by Palestinians.

The world must condemn in its totality, the use of live ammunition by the Israeli forces on stone throwing Palestinian protesters.

The question the Israelis and its allies must answer among others is, did the protesters through their action constitute a threat to life that resulted in the unwarranted killings of innocent souls.

The best the Israelis should have done was to use rubber bullets and water to disperse the protesters, the resort to use of live bullets amounted to an over kill.

The world must address a situation where both the Israelis and Palestinians are made to coexist peacefully. All injustice done to the Palestinian people must be addressed at the United Nations and the world court in the Hagues’. I guess without this, the world can never know peace, since the rise of terrorism and its escalation can be remotely traced to the Palestinian question.

I am for world peace and just felt I should say my own.