Latest News
.….We don’t have schools, no hospitals, residents lament
Over two million residents in 54 Community Development Associations, (CDAs) in Ogun State have threatened to “defect” to Lagos State over decades of abandonment by the Governor Ibikunle Amosun led government of Ogun State.
The communities affected comprised of towns like Odewale, Akera, Aboro, Adalemo, Aina Adubuleja, and part of Opeilu Town.
They cited decades of neglect as the primary reasons for their historic decision. According to the residents of the communities, the government and their representatives at various levels from Local government to the National Assembly have failed them. 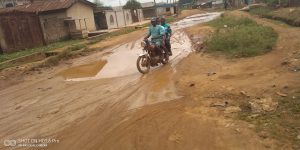 A bad road
While their neighbours on the Lagos State side of their communities are enjoying the dividends of democracy through various infrastructure projects especially good roads, they said their communities have been left to rot.
In a communique that follow series of meetings and signed by the Chairman, Mr. Oladimeji Abiola, the communities under the Akera Community Development Committee (CDC), stated that they have suffered from lack of good roads and health facilities for decades. 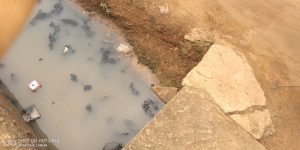 Blocked gutters
“The communities are just a step away from Lagos State and most inhabitants always feel they should belong to Lagos,” the communique reads.
Listing their grievances, the communities said :”The major link roads in the area are: 1. Egbado Road that runs between Dalemo (Alakuko) bus-stop to Oju-irin Odewale and 2. Rafco (Aboro) Road that runs from MAO filling station via Alakuko Road to Rafco Bus stop by the Railway line.
“The two roads are bad and not motorable making life so difficult for the over two million inhabitants of the area.
“The escape road from Rafco Bus-stop through Odewale Town to Itoki Road has being blocked by the contractor handling the Railway project for the Federal government.
“A proposed flyover to be constructed from Idi-Iroko, Ope-ilu accross the railway line to land on Egbado Road would have been a great succor to the users of the Egbado Road but we were reliably informed that the powers that be have truncated the planned bridge for selfish reasons. Rafco Road is completely impassable for any vehicle, even motorcycle.
“There are no health facilities in the community. “The two health centres in the community are under construction. These are 1. Aboro Health Centre and 2. Adalemo, Aina Adubuleja Health Centre.
“There are no viable school in the community except for those established by the community. These are: 1. Aboro Primary School; 2. Akera Community Primary; 3. Ola-Oluwa Community Primary School and 4. Odewale Community High School.
“The only good road closer to the community is the boundary road constructed and maintained by the Lagos State Government. This Road is from Alakuko bus-stop to Ijaiye junction.
“A four bedroom flat in the community with all conveniences costs less than a two bedroom flat in Lagos State along the same road but on opposite sides.
With anger and widespread resentment over such abandonment of the communities by the government of Ogun State,  sentiments are being whipped up against voting for the All Progressive Congress as the 2019 elections approach, a source said. 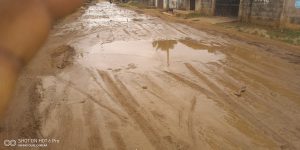