Pep Guardiola has blamed decisions that went against Manchester City in both legs of the Champions League quarter-final as his team was knocked out by Liverpool 5-1 on aggregate at the Etihad Stadium on Tuesday.

Jürgen Klopp’s side won 2-1 through goals by Mohamed Salah and Roberto Firmino after their 3-0 victory at Anfield last week. After Gabriel Jesus put City up inside two minutes Leroy Sané had a goal wrongly disallowed for offside after the ball fell to him from Liverpool’s James Milner. At half-time Guardiola walked on to the field to complain to Antonio Mateu Lahoz but the referee sent the manager to the stands. Guardiola also pointed to Salah’s opener last week, which he claimed was offside, as another crucial decision that caused City to be eliminated, as well as two other key decisions he believed were wrong in that match. Of his red card Guardiola said: “I said [to the referee] it was a goal, Milner passed it to Leroy and I said it was a goal and that’s why he sent me off. It’s different to go in at half-time 2-0. I didn’t insult him, I just said: ‘Mateu, it is a goal’.

“When you go to half-time at 2-0 against that side it is a bit different. The second half of course – the first goal was big quality from Salah, we had to change the way we played.”

Guardiola did call the referee “special”. He said: “I know him from Spain so I could imagine that. I was polite, I was correct. Mateu Lahoz is a special guy, he likes to be different, he likes to be special.

“He’s a referee who likes to feel different, he’s special. When everybody sees things he is going to see the opposite. It’s too much to send off because I didn’t say any wrong word.

“The first goal at Anfield is offside from Salah, in these kind of games and competition the impact is big. The goal from Gabriel Jesus at Anfield is a goal, it is not offside and it is a penalty on [Raheem] Sterling from [Andy] Robertson in front of the fourth official. Of course that is an influence,” he continued.

“I want to say big congratulations to Liverpool for going through and I hope they can defend English football in the semi-finals. They are a top team and a top manager. They deserve to be in the semi-final.” 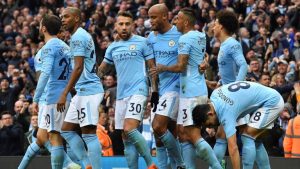 Guardiola’s side have now lost their last three games, having also been defeated at the Etihad by Manchester United on Saturday.

“We’ve had 10 amazing months. We have to recover mentally for the six games remaining,” he said of the Premier League. “Our 10-month winning spell is exceptional.”

Of guiding Liverpool to the semi-finals for the first time since 2008 Jürgen Kloppsaid: “It will be difficult, 200%. We should enjoy the moment because it’s obviously a while ago that Liverpool was in the semis and that I was in the semis. Now we’re together there and it’s quite a cool moment.”