A middle aged father’s insistence on having sex with his 17 year old daughter has led her to attempting suicide twice.

According to a petition sent to the Inspector-General of Police, Ibrahim Idris, by an Abuja based NGO, a copy of which was seen, by Frontline News Online, the girl (names withheld), whose mother is late was sexually molested by her father severally. 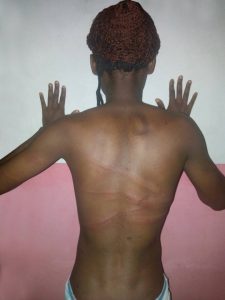 Narrating her ordeal in a written statement seen by Frontline News Online, the victim whose  father, Joseph Ekong is a popular landlord in the Jahi slum of Abuja, resisted a her father’s incestuous advances for years. But she had to escape naked to a female neighbor’s apartment on Saturday, 19 May, when her father attempted to rape her.

For a period two years Ekong  touched his daughter’s private part and rubbed his penis on her body, despite her protests.  Her father’s advances and his frequent beating has led to her attempting suicide twice, according to a lawyer involved in the case.

The victim who reported her father to her step brother and step mother, but couldn’t be helped by either of her older relatives , further said in Mr. Ekong often resorts to beating her each time she rejects his sexual advances.   A picture of her heavily scarred back, resulting from an episode of her father’s beatings was attached to the petition sent to the IGP.

“On 23rd of May, 2017, my father  came again to my room, I thought he came to ask for something different. But he asked me to kiss him, which I refused. He then said I should come outside, which I did. He then asked me why I pushed my little sister , which made her fall. My sister fell, when I tried to wear her shoes for her. I didn’t push her. My father knew this, but he told me to lie down and he started to flog me.

“I started crying and when my stepmother came out to ask what the problem was and why my father was flogging me. While my step mother was still asking questions, my father ran out of our house and went to the house of his first wife, where he slept for the night”, the victim narrated in her statement, which was attached to the petition sent to the IGP.

Investigations by  Frontline News Online, showed that the village association, which Mr. Ekong belongs to  had coerced the victim to back out of the case instituted by the NGO at the FCT Chief Magistrate Court, Zone 6, that was scheduled to be heard on Tuesday August 28.

Frontline News Online called Mr. Ekong on his known telephone number, but it has been unavailable. The SMS sent to the line has not been responded to.