The venue was BMO Events Centre and the event was the 2018 Service/Productivity Award and send forth ceremony of the National Primary Healthcare Development Agency (NPHCDA).

Wednesday November 5 turned out to be a day for the management and staff of the agency to put work aside for a moment and celebrate successes recorded in the year.

Executive Director of NPHCDA Dr. Faisal Shuaib was among the early arrivals at the venue which soon got covered at all corners after other colourfully dressed staff walked in after taking turns on the red carpet. 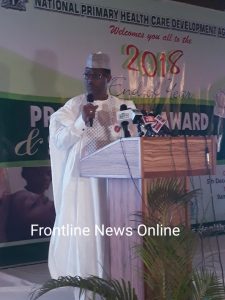 The event compered by the Head of the Public Relations Unit of the NPHCDA, Mr. Saadu Salahu, had a surprise package with staff of the agency presenting a coral rendition of songs on the operations of agency.

Before the performance with received a warm applause, Director of Administration and Human Resources, Hajiya Aisha Lami Abubakar, welcomed guests, saying the yearly ceremony was instituted by the current boss of the agency in 2017 to reward staff and to energise them for improved services.

According to her, the decision to recognise outstanding staff has led to significant improvement in output.

Abubakar revealed that it was difficult picking awardees for 2018 as staff worked much harder in order to make it into the list of awardees. 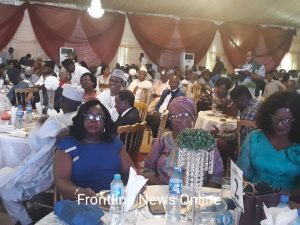 There was a moment of sober reflection as staff who died within the year were remembered and a moment of silence observed in their honour following a slide show in their remembrance.

NPHCDA management and staff came to celebrate what they have been able to achieve and they did just that with a clip of the high points from the agency’s programmes and interventions.

Interventions such as CHIPS were highlighted, effective collaborations with development partners including GAVI, even as the UNICEF SMART survey showed that Nigeria did better in immunisation coverage.

The short documentary also saw the minister of Health, Prof. Isaac Adewole hailing the management of NPHCA as one of the best teams he was worked with in his long years as a health professional.

Development partners took turns to speak at the event, with Dr. Fiona Braka of the World Health Organization (WHO) describing the NPHCDA as growing team that has results to show. There were also goodwill messages from the Bill and Melinda Gates Foundation and EU PRIME.

There was comedy by Nosa and Kingzina.

When it was time to speak, the NPHCDA Executive Director  showered encomia on his staff, saying long hours of work is the reasons why development partners and others had words of commendation for the agency.

He however said those he described as giants were selected for awards because they put in so much work. 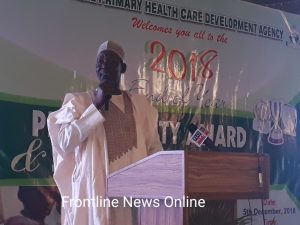 He also expressed gratitude to the health minister for providing support and fatherly advice in the last two years.

The board of the agency  were thanked for being a pillar of support.

“These people we are recognising today are the folks that go beyond the call of duty.

“If you guys haven’t shown commitment we will not be here celebrating. I am the one lucky to be working with you at the NPHCDA”, Shuaib said.

On his part, chairman of the NPHCDA board and Dallatun Gwandu, Alhaji Attahiru Salihu Aliero urged the management and staff to maintain the high standards set in the last two years.

He opined that the level of effectiveness which different speakers at the event had commended NPHCDA must be sustained.

Aliero further expressed delight over the approval of the Basic Healthcare fund.

Speaking to journalists, Shuaib disclosed that N51 billion had been released as part of the Basic Health Fund.

There was a lot to eat and drink as staff picked through a rich buffet.