…Moves to save agency N2.4 billion

Chairman of the House of Representatives Committee on Narcotic Drugs, Dr. Francis  Ottah Agbo, has challenged the National Drug Law Enforcement Agency, NDLEA, to learn from the experience of former Director General of NAFDAC, late Prof. Dora Akunyili on how to effectively run NDLEA in the face of paucity funds.

Dr. Ottah Agbo gave the challenge during the 2020 Budget Performance and 2020 Budget Defense Hearing of his committee with the NDLEA on Monday. 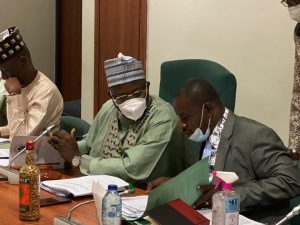 He recalled that only little was known about NAFDAC before Prof. Akunyili became the Director General of the agency but said she was able to use her influence to make impact in spite of poor funding.

He said, “Before the late Prof. Dora Akunyili became the DG of NAFDAC, most people didn’t know of the existence of NAFDAC in Nigeria.

“NAFDAC was underfunded, underequipped and understaffed like NDLEA, but when she came in as DG of NAFDAC, she changed the narrative and many people began to know about NAFDAC in Nigeria.”

Dr. Ottah Agbo said though the management of NDLEA is doing its best, but its best is not good enough and called on it to work harder.

He said, “Chairman and management team of NDLEA need to work harder so that Nigerians would truly know about the existence of the NDLEA the way they knew about NAFDAC when Akunyili was DG in the face of poor funding.”

The House Committee chairman  offered to intervene to save the NDLEA the sum of N2.4 billion contained in its budget which it is proposing to use to purchase property for use as office.

Dr. Ottah  Agbo who represents Ado/Ogbadibo/Okpokwu Federal Constituency, said his committee would liaise with the ministry of Justice to have one of the property seized as proceeds of financial crime by the Economic and Financial Crimes Commission, EFCC, handed over to them instead of spending money to purchase a new office.

Dr. Ottah Agbo popularly known as the Ozigizaga of Enone Politics, suggested that rather than allocate N2.4 billion for the purchase of property which would eat deeply into the budget of the agency, it would be better to explore the process set by the Federal Government to hand over some of the confiscated property to the agency.

He said this would enable the NDLEA which has been complaining of poor funding to have more funds at its disposal to purchase arms, ammunition, more sniffer dogs,scanners, vehicles and so on to achieve its core mandate of fighting the menace of drug addiction in the country.

Dr. Ottah Agbo regretted the fact that many of the weapons used by NDLEA to fight drug traffickers were those used during the civil war, a situation he noted has made Nigeria a laughing stock in the international communities!

He enjoined members of the committee of Narcotic Drugs to help NDLEA in sensitising Nigerians against drug addiction by budgeting for it in the mail 2021 Appropriation.

“We should look at what the budget for sensitisation is and see if it is enough. If it is not enough as a committee we do something about it,” he stated.

Ottah Agbo who is the Spokesman of the Minority Caucus of the House of Representatives, said his committee did not remove, amend or adjust any figure in the 2020 budget as presented by the NDLEA because it believed it got its priority right.

The Lawmaker said his committee will decline to pass the 2021 Appropriation if at  any point it has evidence of lack of due diligence in the implementation of the 2020  budget.

He said with the challenges facing Nigeria owing to the Covid-19 Pandemic, year 2021 presents an opportunity to re-appraise, re-strategise and reposition.

“The role of the NDLEA at this time can never be less challenging than it was. Whilst I do not envy you at this time, I urge you to rise up and vigorously work in conjunction with other sister agencies and international organisations to ensure the attainment of your mandate.

He said the process where over the years, budget defense has been turned into ritual of rhetoric without corresponding action must stop.

“For us to attain greatness and be respected in the committee of Nations, we have to translate our budget to tangible outcomes,” he added.

The NDLEA chairman, Alhaji Mohammed Mustapha Abdallah had stated while presenting the 2021 budget estimate of the agency that the agency has 49 formations with one each in all the 36 states and the Federal Capital Territory as well as in sea ports and airports.

He said the NDLEA is however finding it difficult to fund the formations with N15 million allocated for that purpose  per month.

He said there’s need for increase surveillance in all local governments in the country.

He said the agency is yet to have an  office headquarters in Abuja and appealed to the House Committee to come to the aid of agency.

The NDLEA chairman said the NDLEA currently lacks funds for information gathering and for other operations saying funding will go a long way in curbing corruption among the rank and file of the work force and reduce threat of insecurity and enhace a drug free Nigeria.

On the issue of declassifying Cannabis for economic advantage, the NDLEA chairman said Cannabis by law is not allowed in Nigeria and that it is not true that it has medicinal value.